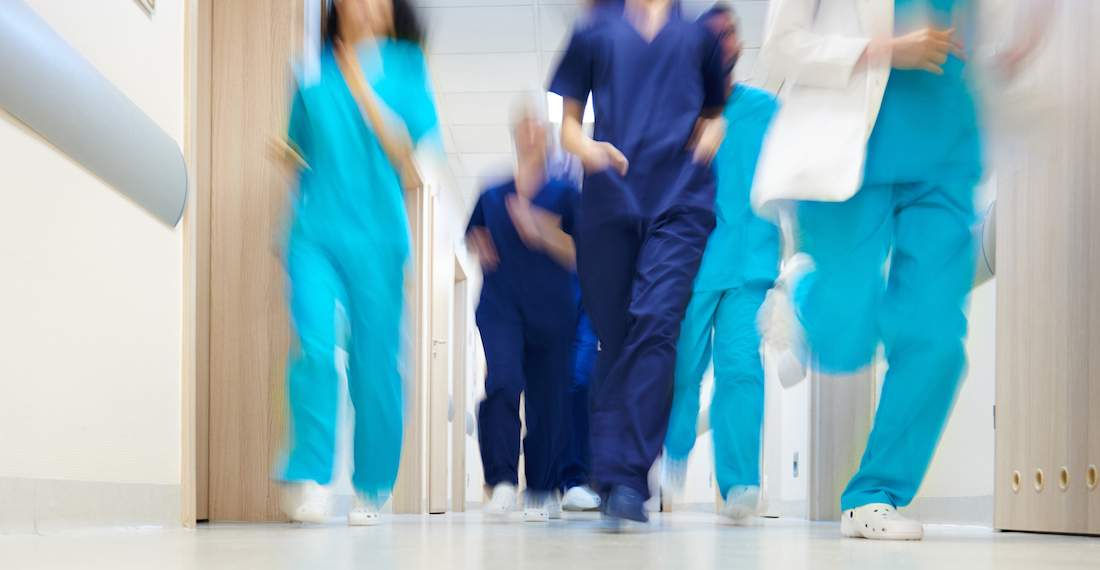 For newly qualified doctors, the prospect of attending emergency clinical situations, such as a crash call, for the first time can be nerve-wracking. As part of our blog series aimed at helping you feel more prepared for your first clinical jobs, Dr Emma Cox, current Quality Improvement and Emergency Medicine Fellow and Chief Product Officer at Medics.Academy, speaks to Medics.Academy Fellow Anna Harvey about her experiences attending crash calls during her first FY1 job.

When I started my first job of FY1, I was given the on-call bleep to carry. I was unaware that I was part of the crash team until an announcement flashed over the pixelated display, asking all members of the crash team to respond to the switchboard. I was panicked – I hadn’t done my ALS and was unsure I would know what to do.

I remember someone joking that if there is a crash call you should first run to the floor below, then the floor above and then to the crash call. You didn’t want to be first, but by running, you would turn up sweaty enough to look like you had tried really hard! Most shifts there wasn’t a crash call and if there was, it was often a false alarm.

My first real crash call was a middle-aged man who had had an out of hospital arrest and was being brought in by ambulance. The paramedics had called ahead so it went off on the bleep system before the patient had arrived. We all gathered in resus to await the patient. I was surprised how many people were there: nurses, anesthetists, medical registrars, medical SHOs, A&E registrars and me – the medical FY1. I felt useless and had no idea what to expect. I could feel my heart beating fast.

The medical registrar took charge and allocated roles. Each member of the team was given a specific job to concentrate on when the patient arrived. I was told that my job would be to document, and to time.

Note: Good Leadership and Delegation in Crash Teams is Everything

The clip above was modified from a lesson in Leadership and the Crash Team, by Eoin Walker. The full course covers topics such as closed-loop communication, situational awareness, and how to stay calm in stressful situations. Once completed you will be provided with a PDF certificate for your CPD.

There was a buzz of anticipation in the air. The paramedics pulled the patient through the doors and the room burst into activity. The paramedics were trying to hand over but everyone was focusing upon doing their pre-allocated roles. The med reg, who was leading the arrest, stood back from the patient so he had an overview. He instantly realised the problem and asked everyone to stop what they were doing and to be quiet so they could hear the handover.

The patient was normally fit and well and had suddenly arrested whilst out shopping. A bystander doctor had started CPR. By the time the patient arrived, resuscitation had already been attempted for an hour in the community without any success. Adrenaline had been given by the paramedics with compressions done throughout using a LUCAS mechanical compressions device. The paramedics had maintained the patient’s airway with a laryngeal mask airway.

The med reg finished the handover to the group, and immediately everyone drove forward once again with their assigned jobs. The anesthetist added end tidal CO2 measuring and began bagging the patient; the LUCAS continued with chest compressions; the SHO attempted a femoral stab; the ED reg performed an A-E assessment and the nurse attached defibrillator pads…

My role in the chaos

I stood at the edge of the action, staring into the blur of activity and scribbling down as much as I could, despite not really having a clue what was going on. I felt entirely out of my depth. I was aware of how important it was to get the notes right, but I’d never recorded medical information of such volume and pace before, and I simply didn’t know how to do it. To make matters worse, I was simultaneously trying to time. At two minutes I told the med reg, who in turn told the team “two minutes, off the chest, pulse and rhythm check.” Three members of the team were checking for pulses. One by one they reported, “No pulse.” The med reg read the defib – asystole, so no shocks advised – back on the chest. Everyone re-started their previous activities.

Bringing it to a close

The med reg then asked one of the medical SHOs to prescribe adrenaline and one of the nurses to give it. He asked the nurses to tell him when it had been given, ensuring that everyone on the team was using closed-loop communication. He also asked them to prescribe and give some fluids through a pressure bag. The ED registrar presented his findings from the A-E assessment; they hadn’t found any obvious cause for the patient’s condition. The medical registrar would recap the eight reversible causes of cardiac arrest to ensure we weren’t missing anything. The medical SHO had managed to get an ABG, which showed that the patient was profoundly acidotic with a highly elevated lactate.

The whole process continued for about half an hour without any change from asystole. After a while, the med reg said he thought we should stop. He asked each member of the team in turn if they were in agreement. We agreed and we stopped. The nurses removed the equipment and put a hospital gown on the patient and the medical registrar spoke to their next of kin.

It was over, and without anyone saying a thing, we each went back to the department or ward we had come from to continue with our day. It was as if nothing had happened. I spent some time clarifying my notes, tidying them up and ensuring they were an accurate reflection of the crash call. I wished I had had the opportunity to practice the skill of keeping accurate notes in a high-pressure situation before – perhaps in a simulation setting. Once I was satisfied, I got on with my day job. I didn’t know any different.

I found it hard to get on with ‘normal business’ as my head was somewhere else. It kept playing on my mind how fragile life is. I felt I needed more support from my team in order to process what had happened. After a situation like an arrest the team should have a formal debrief. I have since been at arrests where this happens and it helps – as does a cup of tea and taking 10 minutes to look after yourself, before getting on with normal life. If you’ve found this post useful, you might be interested in Medics.Academy’s ‘Leadership and the Crash Team’ video course. It’s part of Medics.Academy’s new F|Docs platform, which provides video courses on clinical scenarios you may encounter as a foundation doctor, as well as the ‘hidden curriculum,’ with videos on understanding your contract; leadership as an FY doctor and more.

Anna Harvey is a Final year medical student and Medics Academy Fellow. She is interested in women’s health, education and journalism. Dr Emma Cox, for sharing her story. Emma is the Quality Improvement and Emergency Medicine Fellow and Chief Product Officer at Medics.Academy. She and Dr Vidushi Golash wrote and presented the F|Docs course, The Junior Doctor Contract.